League of Legends betting is a way to wager online on one of the most popular games in the world for real money. Much like traditional sports betting, eSports betting is a great way for fans of these games to get involved and potentially make some extra cash. For League of Legends specifically, there are a ton of different ways to get involved in the action both in traditional and non-traditional ways that make an already fun sporting experience even more so. In this guide, we’ll let you know what kind of betting can be done and the ways to have the best chances to win. You will read more about profitable betting strategies and you will also get the chance to benefit from an attractive promotion, which will be presented in the following table.

What types of wagers are there?

Most commonly, bettors on League of Legends are going to be betting on the outcomes of competitive matches that are taking place at the highest levels of the game. Included are competitions such as the Worlds and LCS, which pit the best players in the world against one another for potentially huge prizes should a team manage to win a tournament. The main betting lines that bettors will see when they wager on League of Legends matches will be moneylines, spread wagers, and totals.

Moneylines are bets that simply ask bettors to pick the winner of a specific match. These wagers are easy to understand, but can be difficult to navigate profitably. This is because the favourites in moneyline wagers require bettors to risk a higher amount to win their desired payout. Underdogs pay out more on the same amount risked, but have a lower probability of winning. The key to moneyline betting is to find a balance of favourites and underdogs that can pay out profitably and here is an example of moneyline odds.

Spread wagers give bettors the chance to bet on which team will win the most maps with a handicap applied to either side. The favourite has maps subtracted from their total won when all is said and done, while the underdog has maps added on at the end. Although there is only one map in the League of Legends game, each round of the game is called a map, which is similar to a set in tennis. Most League of Legends matches are best of three or best of five matches, depending on the competition.

Totals betting is different, in that which team wins has very little to do with the success of the bet. instead, these wagers are typically asking bettors how many kills will be scored by the teams combined. More often than not, the higher the number of maps required leads to a better chance of the over hitting, although a series of rounds that end quickly could put a stop to that.

Some sites offer more exotic wagers as well, such as first blood wagers or 1v1 wagering, where bettors can take a swing at which team they think will get the first kill in a match or which player will outperform the other. These are fun, but the smaller sample sizes lend themselves to more surprises, which can be good or bad depending on a bettor’s wagering habits. The following table shows you example odds.

These markets are available before the start of matches, but live market betting might also be a possibility at some sites. In live betting, the odds for a match are adjusted as things happen to reflect the new chances of a team winning a match or based on the updated kill counts within the game.

Less traditional LoL betting also exists in the form of skins betting or fantasy eSports. Skin betting lets bettors wager on a roulette style game where they can win skins to be used throughout the game. Fantasy players, meanwhile, can form teams of players from different squads and get points based on their performances in matches. Fantasy games also often have a lounge where players can have a discussion with fellow fans or brag about their performances, which is always fun.

How can I win?

In the case of spread, moneyline, and totals wagers, bettors win when their desired outcome takes place. To give yourself the best chance of that happening, bettors should do as much research as they can on the game and the teams competing in it. This can often reveal information on the matchups that are taking place, especially in a game where different heroes have different strengths and weaknesses. Just like you shouldn’t bet on basketball without knowing a team’s starting lineup, the same can be said for League of Legends betting.

In the case of skins betting and fantasy contests, knowing your odds ahead of time can be a huge boost. In fantasy contests, odds can depend on the number of competitors that are in the same contest as you. For skins betting, the odds can vary depending on a site’s set win probabilities for each game they offer. This is something worth finding out ahead of time, as a site might offer a tiny chance of winning something of value, which could make playing elsewhere a better idea.

What are the typical odds on a League of Legends match?

Odds in League of Legends betting vary depending on what type of market is being played. Spread and totals wagers have a general baseline of -110 odds when all things are considered even at most sites. However, if bettors can find slightly more favourable odds on spreads and totals, those slightly better odds can save them some serious money in the long run. The goal of sports betting is to find the best odds, so players shouldn’t be afraid to look at multiple sites to find the odds that work best for them. 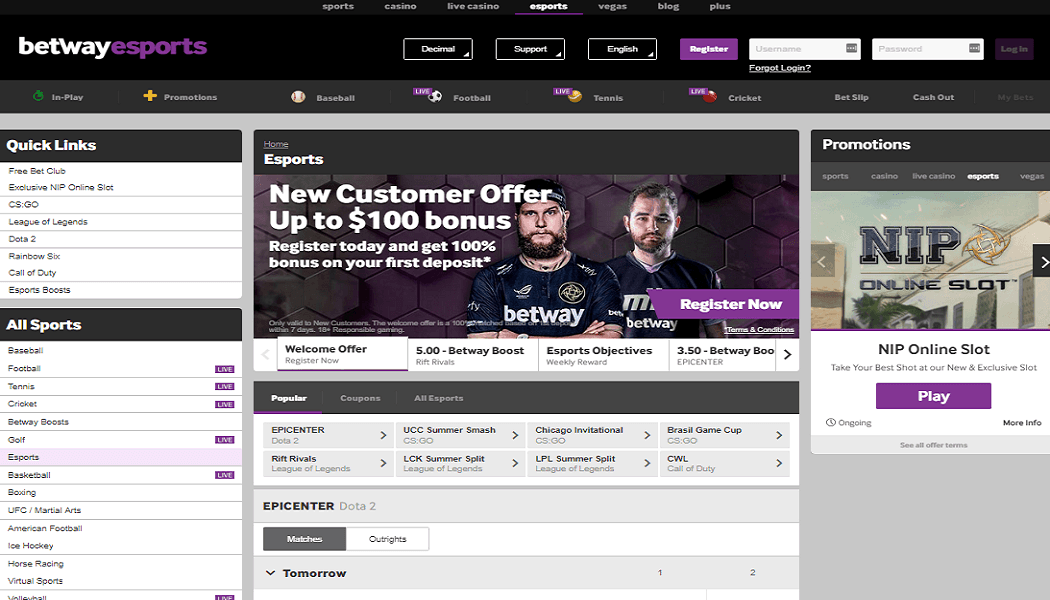 Betway Sports offers you a comprehensive eSports section, which is not very common in the industry

As for moneyline wagering, odds fluctuate based on matchups and how likely it is for one team to win over the other. In the cases of extreme mismatches, the odds can be very skewed to where a bettor would have to put down a large amount of money to win their desired payout amount. Conversely, underdogs in that scenario would pay out handsomely relative to the amount risked.

When looking at League of Legends odds, the best thing a bettor can do is use their knowledge of the game to find any spots where the odds might be more favourable than they should be. Those market inefficiencies can help bettors make a profit in spots where most bettors wouldn’t be able to see the opportunity.

What are some tips and tricks?

One of the most important tips for betting on League of Legends is to make sure that whichever site you are wagering with has the ability to be used on the devices that you like to use. If you are someone who is constantly on the go but also wants to place bets on eSports, for example, you would be best served playing with a bookmaker that offers mobile betting via apps or mobile sites.

Also, be sure that wherever you are betting that you read the terms and conditions for the site before you get too involved. Doing so will make sure that you are not breaking any of the site’s rules, to where your IP could be banned from participating in the site in the future. At the very least, reading the rules on eSports betting to make sure that you understand every possible wagering scenario would be a good place to start.

Finally, and this might be the most important piece of advice, players should make sure that they are looking at the licensing information of any site they want to wager with. This information confirms that a site is legitimate and that they have rules they need to adhere to, such as not taking your money or failing to protect your information. For peace of mind, this is a great thing to do for every single site you contemplate using.

As a whole, League of Legends betting has the potential to be very profitable for bettors who follow the advice in my guide to betting on one of the most popular digital sports around. There is a lot to keep in mind when doing so, but keeping the many factors that go into successful eSports wagering handy can be the difference between placing winning bets and going back to the drawing board. Just like in the game itself, finding out just which of those two things you will be doing is in your hands.